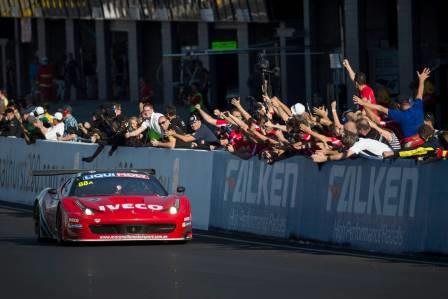 THE most incredible of Liqui-Moly Bathurst 12 Hour races has been emotionally won by Craig Lowndes, Peter Edwards, John Bowe and Mika Salo, driving a Ferrari 458 GT3.

The Ferrari-driving quartet won today’s race by just 0.4 seconds in a thrilling finish between Lowndes and HTP Motorsport Mercedes Benz driver Maximilian Buhk in front of a big crowd and a massive live TV and online audience watching the drama unfold.

The thrilling battle saw the pair locked together during the 15-minute sprint to the flag in a dramatic endurance race finish for the ages and one that eerily mirrored the dramatic Bathurst 1000 climax last October.

In the end, Bathurst legend Lowndes added a 12-hour trophy to his five Bathurst 1000 wins today whilst team-mates Mika Salo, and Peter Edwards won their first.

John Bowe scored his third 12-hour triumph in a day that saw the Melbourne-based Maranello squad win a race that their former driver Allan Simonsen had made his own – the team dedicating their victory to the Dane, who passed tragically at LeMans last year.

The 0.4 seconds final margin was the closest finish in Liqui-Moly Bathurst 12 Hour history.