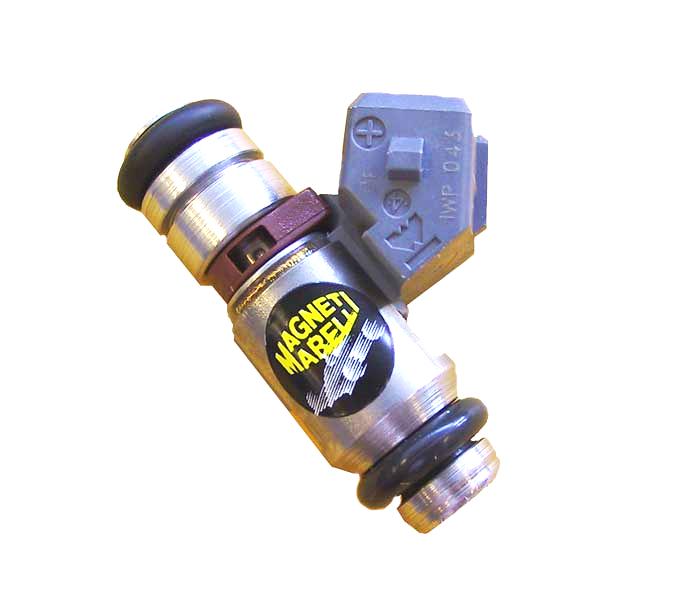 Sizing up fuel injectors is actually pretty straight forward, even if you only know a few factors about an engine.

Engine HP must be realistic estimate of engine output.

For example, to calculate the individual injector size for a 650 HP V8 using eight injectors and assuming a BSFC of 0.5:

Keep in mind your application and other mechanical modifications that have been made to your engine. The number of cylinders or extremely high rpm engines (such as rotary engines) may require larger injectors due to on/off times.

If you have a known injector fuel flow rate you can solve the above equation for a rough estimate of fuel system capacity like this:

Determining the correct amount of injector fuel flow is only part of injection selection process. You also have to match the injector’s operating parameters to your injector driver. Before we delve into these operating systems, you need to understand how an injector operates. When an injector is energized (from the ECU), its internal parts physically move to let the pressurized fuel flow through. The amount of fuel delivered is controlled by how long the injector is energized by the ECU and its driver circuit. This time is usually specified in milliseconds (ms). An injector is “pulsed” open for short periods of time at idle, and held open longer as rpm and the engine’s airflow increases, which requires a corresponding increase in fuel flow. There are two main styles of driver circuits so there are two main styles of injectors: There is a Saturated Circuit style as well as a Peak and Hold style. Before going into the differences, keep in mind that the two are not compatible! Interchanging the different style injectors can result in slower delivery rate, overheating of the injector or driver and even engine damage!

12-volt Saturated Circuit drivers.  This type of driver works by supplying 12 volts to the injectors and the ECU turns it on and off to establish a fuel injector pulse. In general, if an injector has a high resistance specification (12-16 ohms) the ECU uses a 12 volt saturated circuit driver to control it. This means that the current flow in the driver and injector circuit stays low keeping the components nice and cool for long life. Conversely, a downfall of a Saturated Circuit driver is that it has a slower response time (and closing time) than a peak and hold type. This slower time can somewhat decrease the usable operating range of the injector energized by this driver. An injector operating on a saturated circuit driver typically has a reaction time of 2 milliseconds while a peak and hold driver typically responds in 1.5 ms.

NOTE: You can measure an injector’s resistance with a Digital Volt-Ohm Meter (DVOM) by connecting it across the injector’s electrical plug contacts.

These types of injectors and drivers may also be called current sensing or current limiting. They are more expensive and complex than saturated circuit drivers, and are not generally used with production ECUs. They are primarily used in high performance systems. Most high flow injectors are low resistance (2-5 ohms) and use a peak and hold driver to activate them. The Peak current is the amount required to quickly jolt the injector open, and then the lower Hold current rating is used to keep it open for as long as the ECU commands. These require the extra kick from the higher current to keep the opening and closing time of the injector stable at the higher fuel flow rate. With this type of driver, 12 volts is still delivered to the injector, but due to the low resistance, the current in the driver circuit is high. How high? Using Ohms’s Law we can calculate the current rating (12v/2 ohms = 6 amps). This is substantial current flow and a Saturated Injector cannot handle it. The drivers also come in two values; 4-amp peak/1 amp hold, and 2-amp peak/0.5 amp hold. Even though 6 amps may be available to operate the injector, the maximum it is allowed to reach is 2 or 4 amps, depending on the driver’s current limit. Fuel Injectors are typically flow rated at 43.5 psi (3 bar) but they will also perform and flow more fuel, with higher fuel system pressure. Increasing the fuel pressure also better atomizes the injector’s fuel spray and improves its uniformity. So if you make slight changes to your engine combination you may be able to compensate without having to replace all of the injectors by increasing the fuel pressure. But how high can the pressure go? It is recommended that the fuel system pressure does not exceed 72.5 psi (5 bar) and that the specified injector electronic drivers are always used. To illustrate this increased flow capacity, here are the results of pulsed fuel testing of two large injectors,  (72 lb/hr) and  (96 lb/hr). Both injectors were operated with their specified electronic driver at an 85% duty cycle (equaling 10.4ms on-time).

Note:  Adjustable Pressure Regulators are useful for setting fuel pressure and fuel specific gravity was 0.788. Wide-open, non-pulsed static) flow would of course be higher, but this data is more accurate for real world use with an engine management system.

If you know an injector’s static (non-pulsed) fuel flow at one system pressure you can derive its static flow at another pressure with the equation at right.
*@ 10.4 milliseconds.

F2 is the calculated injector static flow (lb/hr) at the higher pressure.

Following are two conversions tables to assist your calculations